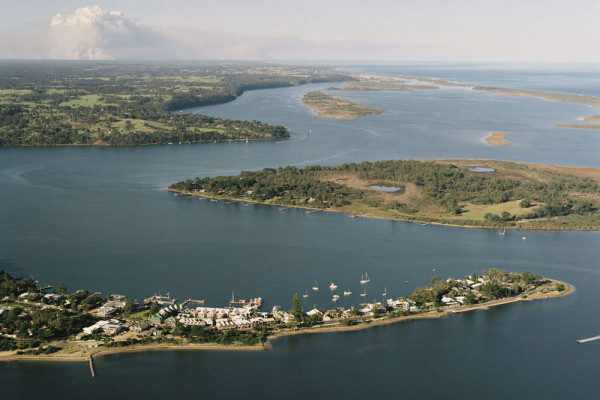 The Lakes National Park is a peaceful bushland retreat in the Gippsland Lakes, fringed by the waters of Lake Victoria and Lake Reeve. The park occupies 2,390 hectares of low-lying woodland and coastal heath, consisting of Sperm Whale Head peninsula, Rotamah and Little Rotamah Islands.

Clearly defined tracks offer some exceptional views and bird watching opportunities. The tracks are generally sandy and gently undulating and are suitable for family outings. A small picnic area is set aside adjacent to the observatory only a short stroll from the jetty on Rotamah Island. A barbecue, toilets and picnic tables are available. The camping area is restricted to groups who book in advance through the park office. Fireplaces, toilets and water are provided and a small fee is charged. The Rotamah Island Bird Observatory also offers good accommodation facilities as well as providing excellent reference material and educational opportunities. Fees are charged and inquiries should be directed to the wardens on (03) 5146 0278

From past to present
Rotamah Island had a number of occupants until 1975 when it was bought by the Victorian Government. In 1978 Rotamah and Little Rotamah Islands were added to The Lakes National Park. In late 1979 the Royal Australasian Ornithologists Union, now called Birds Australia, began leasing the island's homestead to operate as a bird observatory. Currently the observatory is involved in various research programs as well as regularly running weekend natural history courses.

Plants, animals and birds
Rotamah Island supports eucalypt and banksia woodland on its sandy soils. Much of the island is open woodland, a reminder of the grazing that occurred. The lower lying areas contain dense stands of melaleuca. The island supports populations of Eastern Grey Kangaroos, Swamp Wallabies, possums, echidnas, wombats, reptiles and bats. Rotamah Island is also renowned for its prolific bird life and more than 190 bird species have been recorded. Commonly sighted birds include Emus, grebes, cormorants, pelicans, rosellas, robins and the graceful White-bellied Sea Eagle.

The Gippsland Lakes area was once part of a large bay. Over many thousands of years sands deposited by the sea have formed a series of barriers including the Sperm Whale Head Peninsula, Little Rotamah Island and Rotamah Island. The outer barrier eventually enclosed the bay and formed the Ninety Mile Beach. These barriers are up to 38 metres high and enclose the waters that make the Gippsland Lakes.

Aborigines of the Kurnai nation were numerous in the area at the time of European arrival as can be seen by the many shell middens in the sand dunes along the Ninety Mile Beach. The abundant wildlife and mild climate of the Gippsland Lakes provided plenty of food making it an ideal area to inhabit.

In the summer of 1840 explorer Angus McMillan reached the shores of Lake Victoria and soon after cattle runs were taken up in the district. During this period much of the area now covered by park was cleared and cultivated for grazing.

Through the efforts of Mr F.W.C Barton and the Field Naturalists Club of Victoria, 1,451 hectares on the Sperm Whale Head peninsula was reserved in 1927 for the purposes of a national park and proclaimed The Lakes National Park in 1956. Rotamah Island and Little Rotamah Island were added to the park in 1978. Natural bushland has since regenerated and much of the wildlife has returned to the area.

More than 190 species of birds have been recorded in the park including the rare White Bellied Sea Eagle and the endangered Little Tern.

Eucalypt and banksia woodland are widespread on the sandy soils throughout the park. Areas of coastal heath are interspersed with swampy, low-lying areas that support salt marsh vegetation.

From August to November, the park is at its best with a spectacular show of wildflowers and one of the best displays of native orchids in Australia.

Several rare plant species occur including Ribbed Thryptomene (Thryptomene micrantha) which, apart from this area, is found only in Tasmania and the York and Eyre Peninsulas in South Australia.

The Lakes National Park is in East Gippsland about 300 km east of Melbourne. The park is located at the eastern end of the township of Loch Sport, 63 km east of Sale. Boat access is possible from Paynesville (5 km).