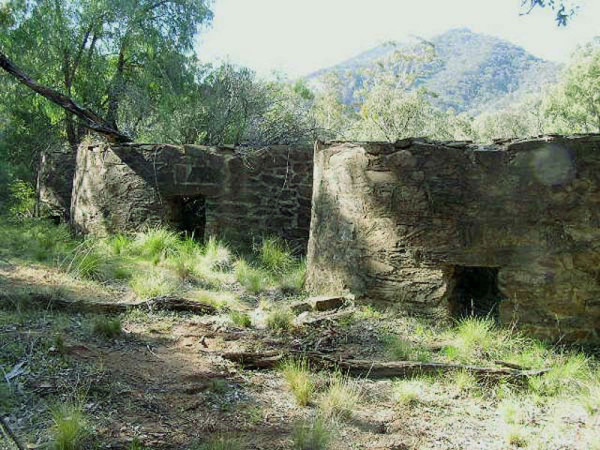 In its day the Oriental Claims was one of the largest gold-sluicing operations in the world. Today many of the mining remnants, caves and mining sites can be viewed along the short walks around the Claims.

Originally referred to as Livingstone Creek, the name 'Oriental Claims Historic Area' may conjure up visions of thousands of Chinese scurrying about with shovels and wicker baskets filled with dirt. In fact, the name refers to a 19th century European mining company, 'The Oriental Company', that worked a particular piece of the ground. Discover the history of this area on foot by taking one of the suggested walks below.

Crossing the Dry Gully Creek Bridge this leisurely walk takes you to the site originally worked by Ah Fong in 1875. It is one of the most extensive and rich sites within the Oriental Claims. The claims here were worked at two levels and by comparing the height of the land through the trees in front of you with that behind, you can gain an appreciation of the amount of material removed from this site. This loop walk incorporates information panels providing interpretation at strategic locations.

This pleasant walk follows the Livingstone Creek to Omeo. A variety of native birds and Swamp Wallabies are regularly seen as the track winds down Bloomfields Gully. In 1924 a pine plantation was established to provide an income for the Omeo Primary School. The plantation was never harvested. The trail arrives at the local swimming hole formed by regulating the flow of Livingstone Creek.

Facilities include male and female pit toilets, picnic tables, wood fuel barbecues, an information shelter and in the near future, a lookout which will enable access for people with limited mobility. Accommodation including motels, bed and breakfast's, holiday units and a caravan park is available in Omeo. The closest camping in Parks Victoria managed land is available at Victoria Falls Historic Area.

Gold in the Omeo district was first discovered in 1851 and recorded in the Sydney and Melbourne press. Miners were soon heading to the high country to stake a claim.

The Oriental Claim Historic Area is approximately 500 acres. In the 50 years that it was consistently worked, estimates total the gold production at 58 000 ounces, which at today's prices would equal about 23 million dollars.

The Wardens report of 1854 stated that there were 50 men working around the site of Omeo only receiving half an ounce a day for their efforts. Daily success rewarded employed miners with a weekly payment of up to seven pounds. Gold fever struck the area with a vengeance and by 1856 a town was emerging with two stores and a hotel, soon to be known as Omeo.

Water played a key role in the sluicing process of mining at the Claims. Even the most basic prospector required water to wash dirt from gold in a pan. Miners in this area owed much to the development of a water race system.

With a distribution of one ounce of gold to every hundred metres, a cubic metre would only yield about five dollars at today's prices. Since man can only pan about a cubic metre per day, faster methods of recovery were welcomed.

The new system ensured that water from above the claim either flowed down the face, or through pipes and a nozzle was sprayed against the face washing gravel through sluicing boxes and down a tail race to the creek. As you walk through the Claims you will notice from telltale gullies and crevices that much of the work was directed by streams and gullies.

This new technique also created significant problems with the discharge of sludge into Livingstone Creek. This led to the formation of the Sludge Abatement Board, which placed restrictions on the Oriental Claims area and eventually ended hydraulic sluicing in 1904. Common box sluicing and hydraulic sluicing also led to the construction of caves in the clay soil which were built by miners following layers of alluvium.

Today the Oriental Claims Historic Area takes us back to a time when this part of the high country showed sufficient promise for future settlement and prosperity, encouraging pioneers to forge out an existence in remote areas of Victoria.

All plants and animals are protected. Please do not remove historic artefacts. Please remain on designated walking tracks to minimise damage to historic earth works. Take your rubbish with you. Camping is not permitted within the historic area.

When walking through the Oriental Claims please remain on the walking trail as much of this area is quite unstable. Beware of possible falling tree limbs in the picnic area. Beware of unstable cliffs, caves and mine shafts.