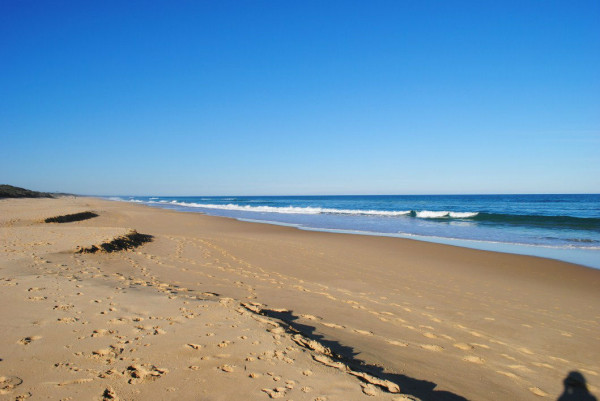 Covering 2,750 hectares and five kilometres of coastline, this park is located 30 kilometres south of Sale adjacent to the Gippsland Lakes Coastal Park.

The calcarenite reefs here are dominated by invertebrates including sponges, ascidians, bryozoans, hydroids and soft coral. The unusual soft coral (Pseudogorgia godeffroyi) is only found in Victoria between McGuarans and Delray beaches. The Ninety-Mile Beach area has been found to have the highest species diversity anywhere on the planet. In ten square metres 860 species were discovered living in the sand and in one square metre a staggering 187 species.

Victoria's Ninety Mile Beach lies on the edge of a long slender sand dune, thrown up from the sea by the easterly waves and protecting the Gippsland Lakes. Offshore, beneath the water, vast plains of sand stretch in every direction. Yet these areas are not as monotonous as they might first appear as there are local variations. Sand particles are sorted into different groups and layers according to the waves and currents, while there are different surface features, such as mounds and ripples, as a result of animal and wave action.

The fine sands of East Gippsland appear to harbour more animals per square metre than most other marine habitats in the world. This great diversity is derived from the myriad of small creatures that call this area home. Creatures that burrow into the sand build tiny tubes or scurry around eating the scraps of food that may drift by. Larger animals are far fewer in number. To conserve their energy and retain access to oxygenated water, animals like crabs, octopuses, brittle stars and shrimp do not burrow very deep.

There are no rocky headlands or platforms along this coast. Offshore, the sandy plains are only occasionally broken by low ribbons of reef which formed as shorelines or sand dunes during ice-ages when the sea-level was lower than today. Even these reefs are periodically covered by sand, shifted around by the strong tidal currents. These reefs do not support the large brown seaweeds characteristic of many Victorian reefs, but instead are covered by resilient red seaweeds and encrusting animals that can survive the sandy environment. Despite their small size and transient nature, these reefs almost certainly play an important role connecting populations of reef animals from rocky areas around Wilsons Promontory to those of Victoria's far east.

There are plenty of fish too and many feed on the seafloor smorgasbord of tiny animals. Schools of pelagic fish like pike, school whiting and snapper are common and the area appears to be a nursery ground for sharks. Young Great White Sharks can be found in the area chasing snapper, one of their favourite foods.

Although the Common Stargazer is one of the largest fish found near reefs on the underwater sandy plains, you would be lucky to see one. It is not that they are uncommon; they are just masters at making themselves obscure. They lie almost buried and motionless, with only their eyes and mouth peering out of the sand. With their skilful ambush tactics, Common Stargazers can rapidly lunge upward and their cavernous mouths can consume unsuspecting fish and crustaceans in one gulp.

Although only six centimetres in length, heart urchins are considered large animals of the sandy plains. Furrowing their way through the sand, heart urchins have a thick covering of short, slick-backed, hair-like spines that ease the movement of sand grains around the body, thereby reducing drag. They are scavengers, ingesting particles of sand and fine organic matter that is processed through the gut.

For the protection of the marine environment, a number of activities are prohibited within the boundaries of Victoria's marine national parks and marine sanctuaries. No fishing, netting, spearing, taking or killing of marine life. All methods of fishing, from the shore or the sea, are prohibited. As users of the marine environment, you can help minimise your impact on these areas by being mindful of the following points:

Remember, Marine National Parks and Marine Sanctuaries are NO TAKE ENVIRONMENTS. All objects (artefacts), animals eg. fish and crustaceans, plants, and the seabed are totally protected.

For your own safety, only undertake activities appropriate to your skills and abilities. Take all necessary precautions, be aware of changing conditions, and watch for potential hazards, such as rips. A number of Victorian marine animals are potentially harmful if not treated with respect and care, so ensure that you familiarise yourself with these species. Sunburn and hypothermia are also potentially harmful but easily avoided.

SCUBA diving is a potentially high risk activity and should only be undertaken by appropraitely qualified people that have completed recognised training and certification. Victoria's cool water environments can be extremely challenging to those used to diving in warmer waters so ensure that local knowledge is sought before undertaking a dive in a new location. Dive charter operators can provide some of the best advice on diving in Victoria.f