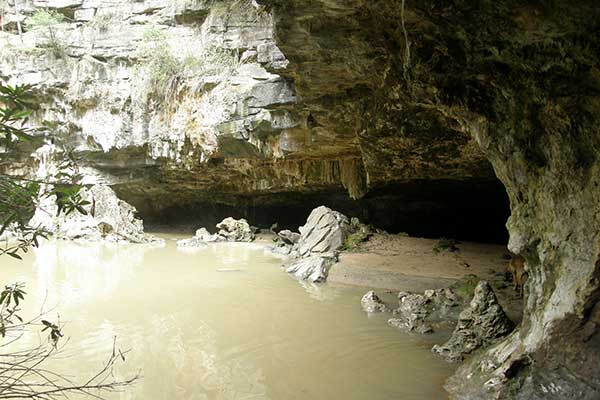 Mitchell River National Park surrounds the spectacular Mitchell River where it passes between high cliffs. There are several gorges, including the Den of Nargun mentioned in Aboriginal Legends. Remnants of temperate rainforest line some of the gorges. The park is 11,900 ha in size and contains some of Gippsland's best forest country.

Aboriginal people hunted in the area and often spoke of the Den of Nargun, a shallow cave beneath a small waterfall on the Woolshed Creek. Aboriginal legend describes the Nargun as a beast that was all stone except for its hands, arms and breast. The fierce creature would drag unwary travellers into its den, and any weapon directed against it would be turned back on its owner.

Australian Paper Manufacturers Ltd donated 143 ha to the State in 1963 to preserve the environment. Glenaladale National Park was formed, and in 1986, additions were made to create Mitchell River National Park.

More than 150 bird species and 25 mammal species have been recorded in the park including 6 species which are rare or threatened in Victoria. The satin bowerbird frequents the rainforest.

Giant kanooka trees grow out of the water amid a tangle of vines, ferns sprouting in profusion. Within the gullies grow pittosporum, lillypilly and yellow-wood, their trunks covered with ferns and mosses. On the ridges above the river a drier forest of wattle and eucalypt predominates.

Mitchell River National Park is 300 km from Melbourne (Melway ref: 508 C9). From the Princes Highway (west of Bairnsdale), approach the park via Lindenow or Fernbank along the Bairnsdale-Dargo Road to Waller Road.